Every day, the men who live here work on factory lines making components used by Samsung Electronics, one of the biggest electronics companies in the world. Last year, Samsung made a profit of almost $50bn (£38bn).

In Malaysia that money is made largely by the hands of cheap foreign migrant labour – millions of workers drawn from the region’s poorest countries.

Malaysia, where forced labour – a form of modern slavery – is commonplace, has a reputation for the flagrant abuse of worker rights.

What was so frustrating was that I’d seen it all before. Two years ago, I travelled to Malaysia to investigate the treatment of these foreign migrants working at Samsung.

Men employed by a sub-contractor, but working on the assembly line of Samsung’s microwave oven plant, told me that their passports had been confiscated, that they were being paid less than promised, and that they were deep in debt after shelling out high fees to recruitment agents in their home country.

Despite working at seemingly normal factories, these men were effectively trapped in their jobs by debt bondage and felt unable to leave even though they knew they were being exploited.

Samsung’s response was quick. They fired the sub-contractor and announced improved guidelines for the recruitment and treatment of foreign migrant workers. The guidelines, which apply to Samsung worksites and its suppliers, state migrant workers should pay no recruitment fees, receive the minimum wage and retain their passports.

Samsung said: “We will be strictly applying and implementing these guidelines across our global operations as well as among our suppliers.”

In September, I returned to see if they had lived up to their promises. 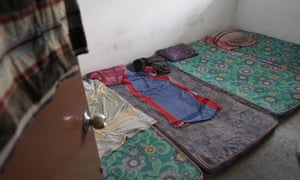 At first, there were some positive signs. Workers at the microwave plant told me the factory was safe, the food was good and they liked the games room in their hostel. Some said they were only being paid a basic salary of about a pound an hour, but they seemed satisfied. Most importantly, those recruited directly by Samsung since 2016 said they had not paid any recruitment fees.

I went back to the factory and followed a group of men heading home on foot at the end of their shift. Dozens of pairs of shoes crowded the entrance to a couple of flats in a rundown apartment block, within sight of the Samsung plant.

The flats were home to 21 men from Bangladesh. All had been hired by a company that supplied workers, through another company, to Samsung.

They told a very different story. They said they paid vast sums to come to Malaysia, some as high as £3,500 – more than three times the annual per capita income in Bangladesh – but were earning less than promised.

Aminul (not his real name) said it would take him about two years just to pay back the loan he took to afford the recruitment fee. “It’s a huge pressure for me to pay back the debt … When I got here, I realized I made a mistake.”

But like all the men, Aminul says he cannot leave.

“My employer has my passport, so if I want to go back home, I can’t,” he said.

Another group of men, working as cleaners at the same Samsung plant, claimed the company that directly employs them was illegally deducting almost a fifth of their basic salary each month, meaning they were earning far below the minimum wage.

What was striking was how afraid everyone appeared. They worried that if they spoke to me they would be deported or punished. One worker, referring to his direct employer, told me:

“If they know I gave you an interview, they will take me to some place and beat me up.”

4 thoughts on “You WON’T believe how a billion dollar company treats their workers!!!”