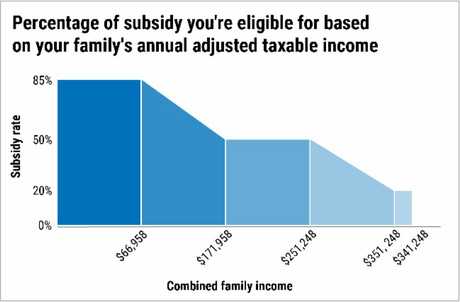 There are about 1.2 million families eligible for childcare subsidies in Australia.

But come July 2, 489,000 will miss out on the funding based on current figures on people registered with the government database, unless they take action and switch to the new system.

Households with a total annual income under $186,958 will no longer face a cap on the amount of rebate paid by to them each year.

Comment: A subsidy is the payment by the government to firms in order to lower cost and price, increase supply.

I strongly believe that the government providing childcare subsidies in Australia is very necessary as childcare will provide positive externality upon the whole economy. This is because providing subsidy to childcare centers will allow them to educate the children that are homeless. Where they may become a burden on the society as they are unemployed therefore will require welfare payment from the government in order to meet their basic daily needs. In addition, they wouldn’t be able to contribute to the economy as they are unemployed. But as now the government starts to provide subsidy to childcare centers, they will have the ability to provide more children to learn knowledge, get educated, and likely be employed in the future. But in the short term, it will require a large amount of tax revenue from the government which may lead to a budget deficit by the government.

One thought on “New Childcare Subsidy: What it means for you”